Illinois has scored its first win with its new electric-vehicle incentive program.

In an action being announced later today, Decatur-based T/CCI Manufacturing, a compressor maker with facilities around the world, will detail a deal with the state in which the firm will convert a 200,000-square-foot former Borg-Warner factory into a center to make cooling devices needed for electric vehicles.

The company will also set up a climate innovation center in cooperation with Decatur’s Richland Community College. State and company officials say the center will serve more than T/CCI, with Deputy Gov. Andy Manar saying he hopes the facility will be the first step in creating a broader EV campus that will spur manufacturing here.

The deal is rather modest, at least compared to multi-billion-dollar EV battery plants that have recently been announced in Ohio and other states. Still, T/CCI will invest more than $20 million and has agreed to keep 103 jobs that now produce compressors for conventional vehicles while adding 50 more.

(Worth noting: execs from T/CCI were on Gov. J.B. Pritzker’s guest list when he headed to D.C. last month to celebrate the passing of the CHIPS bill.)

But officials are hopeful the move is the first of bigger additional announcements to come. “We could have chosen to locate this anywhere. We chose Illinois,” said company Vice President Kara Demirjian-Huss in an interview.  The company has facilities in China and India and considered the latter, as well as other facilities, for the new plant. But the new incentives–mostly payroll tax credits–made a difference, she said.

Those incentives will be worth up to $2 million, with another $250,000 tax credit awarded under a different program, Manar said. In addition, another $15.3 million in grants will go to Richland over some years with the city of Decatur getting $6 million for infrastructure improvements.

“T/CCI has invested in Illinois over the last two decades by growing their global headquarters in Decatur and creating good jobs in underserved communities,” Gov. Pritzker said in a statement. “We are thrilled they are transitioning operations to pioneer and accelerate electrification, which will create jobs and strengthen our economy.”

There’s still no news on the state’s quest to land a battery plant, one which would serve Rivian’s Bloomington factory. But insiders have reported for a while that some quiet progress is being made to lure a battery maker. 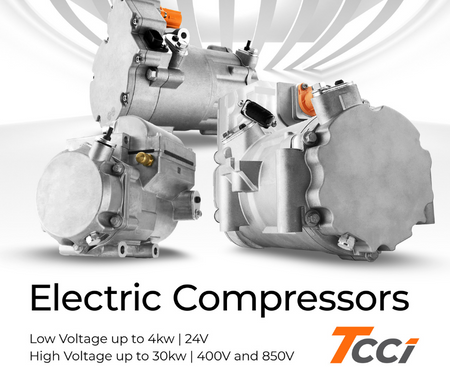 When machines and minds meet, the remarkable happens. In honor of Manufacturing Month, TCCI honors the skilled workforce whose resilience and adaptability pulled us through a pandemic and strengthened

An Industry Chat with Director of Sales Charlie Roberts

Diversification of Supply Chain, Customer Base Crucial During COVID-19

Supply chain and customer diversification are important for manufacturers in any economic climate.

TCCI uses a hybrid of automation and labor practices which helps eliminate waste and increase efficiency across our facilities.

Laying the Groundwork for Machining Excellence

TCCI is laying the groundwork for excellence.

Our latest design—the electric compressor—has adopted the scroll design, which makes for a much smoother and quieter ride.

Mobility-On-Demand: The Future of the Bus Industry By Richard Demirjian, TCCI Manufacturing President

The new QPS65 provides the latest technology and design for buses, transport refrigeration vehicles and other applications that require large capacity displacement.

The Shift To Energy Efficient Refrigerants

The QPRV has gone through rigorous quality testing and validation to ensure every detail works to deliver on our brand promise.

In designing compressors to perform the work necessary, there are many factors such as compression volume, heat of compression and oil passage.

TCCI’s compressor line for agriculture and construction applications is specially designed to withstand wear and tear from long days in the fields.

The TCC/I QPV-125 is built to outperform and outlast the competition.

Customer Questions: How are you able to provide a superior product at a lower price than competitor brands?

TCCI's approach to manufacturing globally delivers consistent quality no matter the location of the plant.

TCCI's QPV-125 is built to outperform and outlast the competition.

What Quality and Durability Mean to TCCI

TCCI is committed to providing our loyal customer base with quality products at significantly better prices than competitors.

Get to Know: Shawn Daly

TCCI’s products are designed to live up to the promise of performance and durability – this means that no detail is too small.

The QP7H is and continues to be, the fastest growing product line at TCCI.

The QP40 is currently the only compressor in its class to offer a solution with a clutch, providing customers an all-in-one option.

At TCCI, we’ve made a number of modifications to our air conditioning compressors to deliver greater efficiency without sacrificing power.

New ideas, innovations, efficiencies and speed-to-market is how we will best embrace and execute our growth strategies in the coming years.

Tillotson and TCCI dedicate themselves to a collaborative philosophy with customers that starts with engineering & application expertise, a fast responsive support program, and global logistics.

Get to Know: Jörg Lehmann, Director of Sales and Marketing

Questions From Customers: How do I know if the compressor has oil in it?

We often get asked by customers if they need to check the level of oil in our compressors as they come out of the box.